The Moon Series coins - the Lunar of Australia - are very popular among investors. It was the great interest in them that contributed to the fact that they were re-released twice. Coins are in demand not only as an investment asset, but also as collectible copies.

The Mint of Australia has existed since the 19th century. At the time of its creation, the country was part of the British Empire. The courtyard is located in the city of Perth, and today is the only mint of the state. However, earlier in Australia there were two more mints that were located in Sydney and Melbourne. They were built next to the mines, but over time only Perth remained functioning.

Until 1970, control over the issue of currency belonged to the UK, but subsequently passed to the authorities of Western Australia. The image of the profile of Elizabeth II on the obverse of coins is a tribute to the centuries-old tradition when portraits of British monarchs were depicted on monetary units.

What is included in the series

"Lunar" were issued in denominations from 5 to 3 thousand Australian dollars. In each denomination, several coins of different years are made, which depict the zodiac symbol according to the eastern horoscope. The reverse side is traditionally occupied by the profile of Queen Elizabeth II.

Coins are made of gold 0.9999 samples, their weight is 1/20 ounce. The following instances have been released: 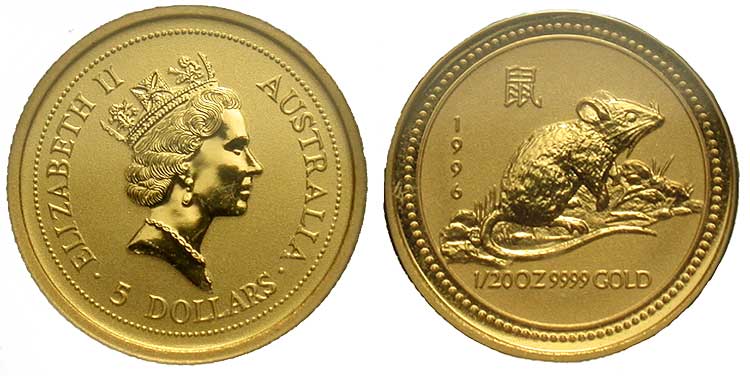 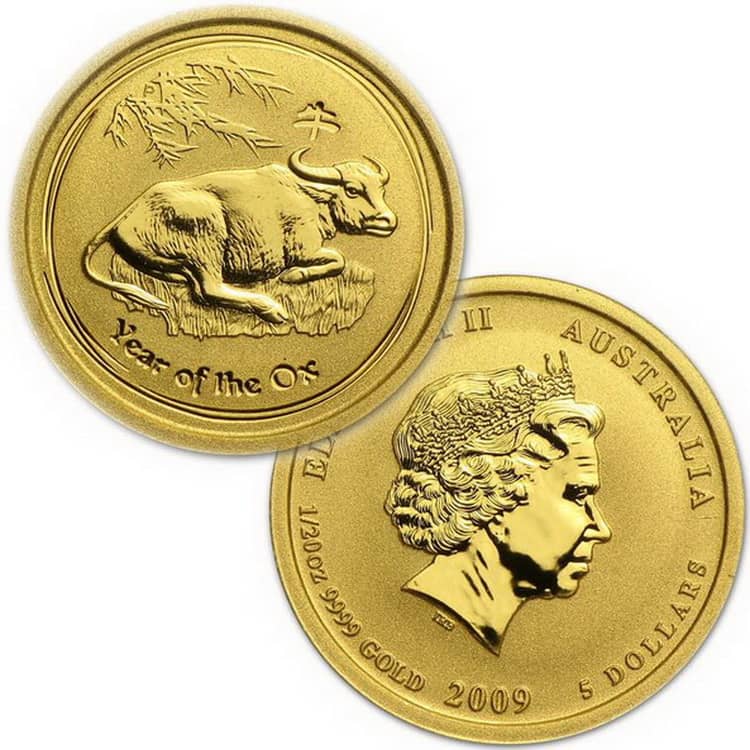 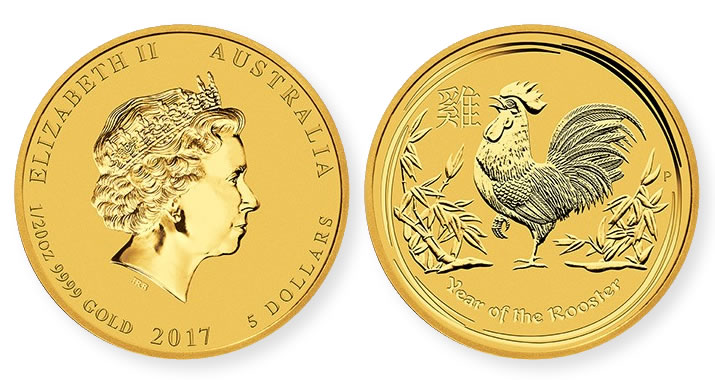 The 10-dollar Lunar received a special Chinese-style reverse design, so they differ from all other coins in the series. Gold coins were minted from metal 0.9999 samples, have a weight of 1/10 ounce. The following instances have been released: 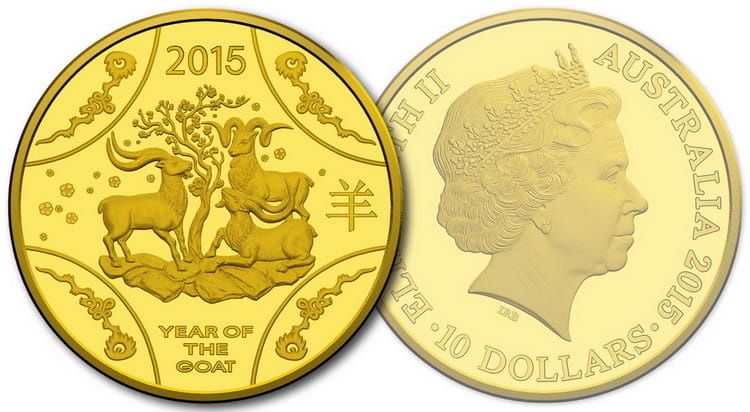 15-dollar copies were released in two series. They have a great reverse design. 0.9999 samples weighing 1/10 ounce were produced from gold. The following instances have been released: 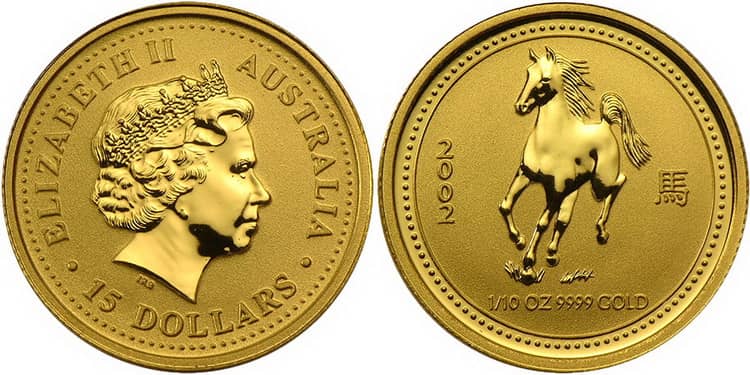 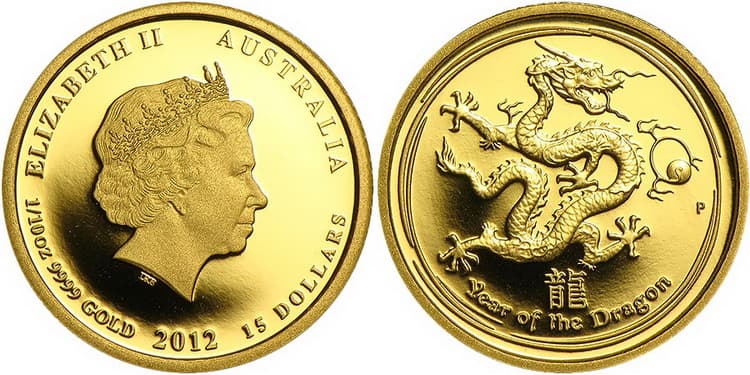 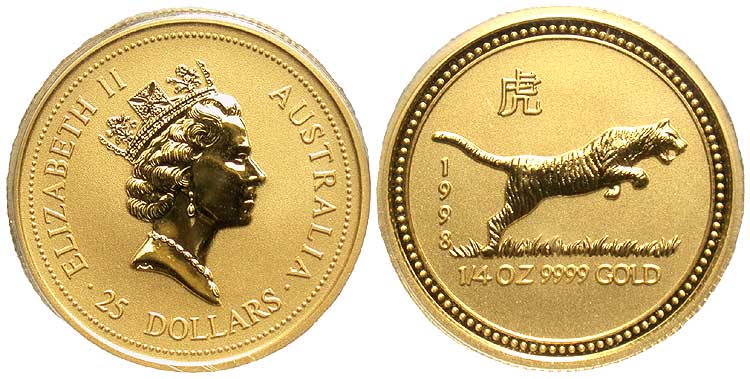 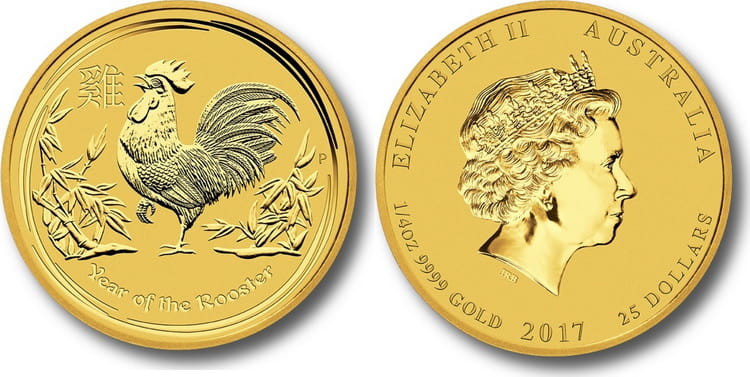 The second edition is significantly different from the first design elements: the type of edging, the Queen's sweat. Gold currency units are made of metal 0.9999 samples, have a weight of half a troy ounce. 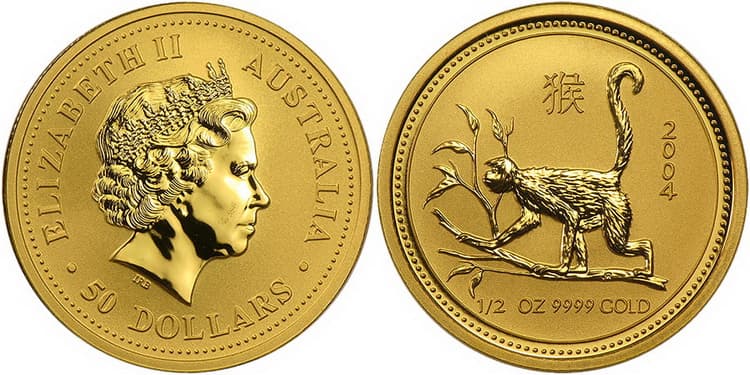 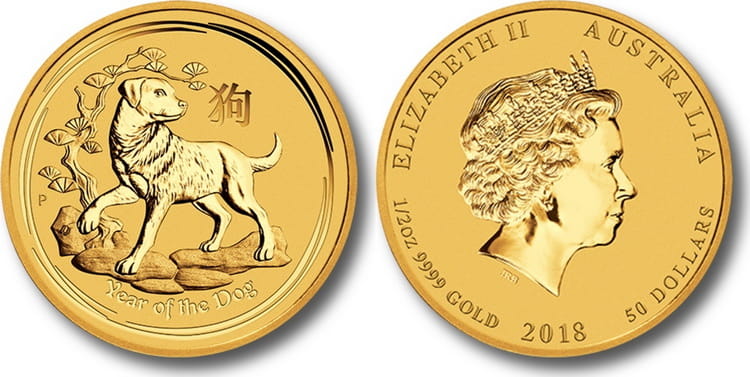 Gold coins weigh one ounce, 0.9999 metal was used for manufacture. 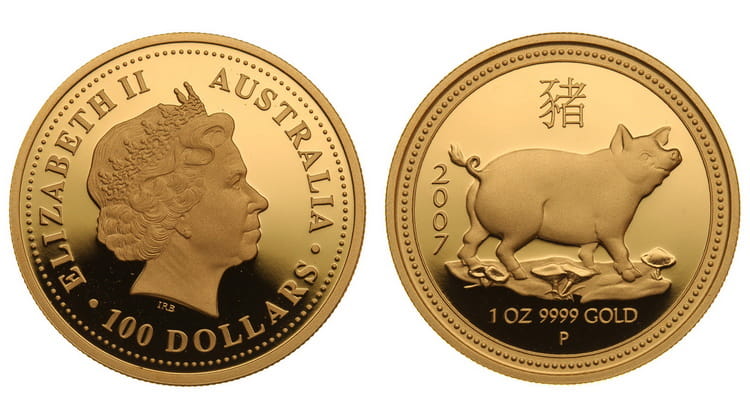 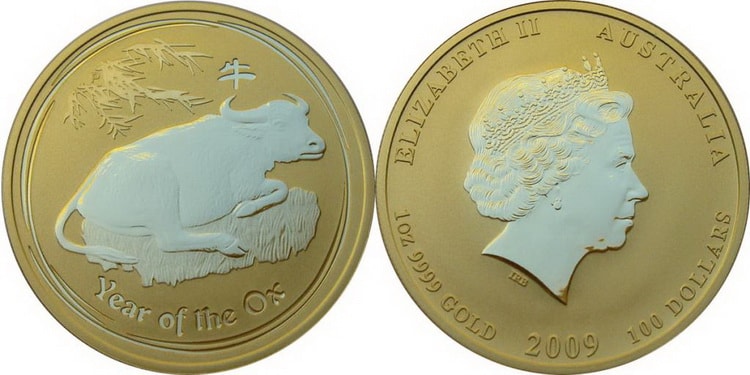 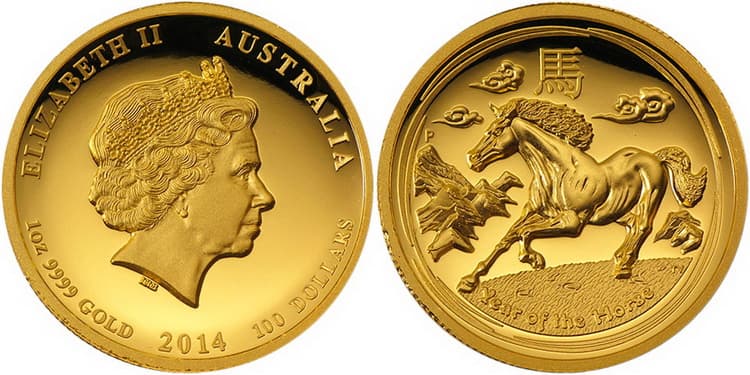 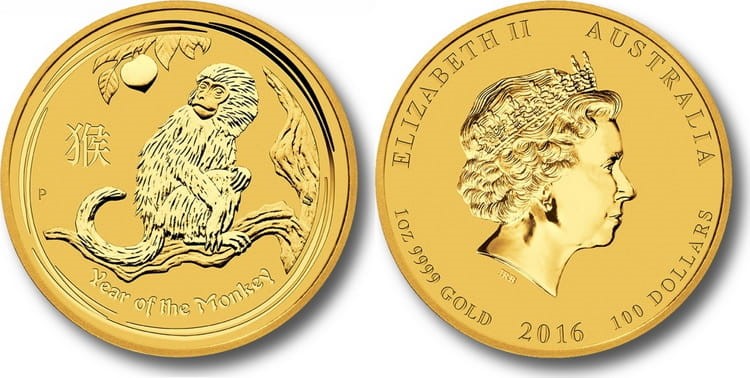 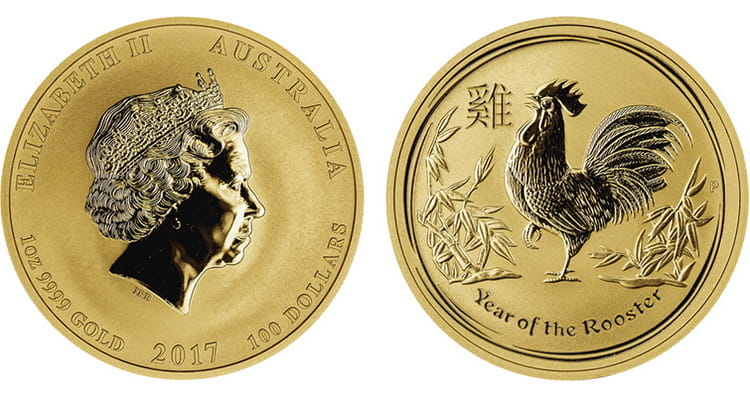 The investment assets of this denomination are made of pure gold weighing 2 ounces. Also reprinted twice. 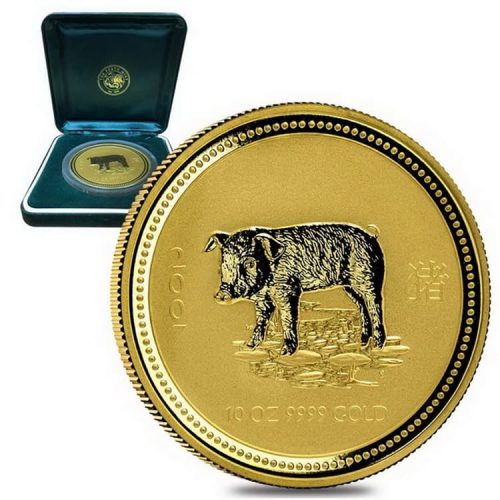 The 1 kilogram article has a diameter of 10 centimeters. And the thickness of the root is almost a centimeter.

History of the series

The Lunar Series, depicting the eastern horoscope, was first released in 1996. For 12 years, the Australian Mint issued units of different denominations depicting an animal dominating the calendar. The last coin was released in 2007.

However, the demand for the first edition was so great that the authorities decided to make a second series. The beautiful design of the coins and the high purity of gold were located in order to choose them as an investment asset. In addition, they became a wonderful gift for numismatists.

Since 2008, the second series of coins was launched, the release of which continued until 2019. In 2020, the Perth Moment Yard launched the third series of Lunar, which will be produced until 2031.

The design of the "Moon Series" is developed by 2 artists: Ian Rank-Bradley and Travis Farley. In general, the editions of the same series differ little from each other, but still there are minor differences in the images. The most different from other copies are 10-dollar coins. Their design is designed in the traditional Chinese style. It is also noteworthy that all monetary units of this denomination are sold in a special wooden box placed in a package with the symbols of China.

The $100 coin of 2016 is also different. On the obverse of the coin around the portrait of Her Majesty is a ring of zodiac circle symbols.

Like any other investment coins, the Luanre is much more expensive than the face value depicted on them. The cost of copies is formed depending on the price of the Troy ounce at a particular moment. This rule applies to any monetary units made of precious metals - gold, silver, platinum, etc.

For example, the price of a 10-dollar copy can reach up to $300, 50-dollar ones cost within $650, 100-dollar ones can be bought for $1200-1350. The cost also depends on the number of copies. The smaller the circulation, the rarer the coin is considered, which means its price is higher.

The Mint of Australia issued not only gold Lunar, but also silver. Their reverse also depicts animals according to the eastern horoscope, and on the obverse - a portrait of Elizabeth II. The cost of silver units, of course, is lower than gold. However, they also remain attractive to investors.

Ваш браузер устарел рекомендуем обновить его до последней версии
или использовать другой более современный.
Club discount information
Data Protection Information
By clicking on the "Accept" button, you consent at any time to the use of KALITA.GOLD cookies, third parties and similar methods to optimize the website and its correct operation, as well as to display ads based on interests. Also, other methods used to conveniently customize the website, create anonymous statistics, link information about your use of this website and our online ads to order transaction data and other customer contacts, or to display personalized marketing content on this website and elsewhere. Click "Privacy Policy" to learn more about how we use your data, who our partners are, what you consent to, and your right to recall at any time. By clicking "Accept," you agree to the use of these technologies and the mentioned processing purposes. You can decline your consent here or revoke it at any time in your privacy policy.
Accept
Privacy Policy