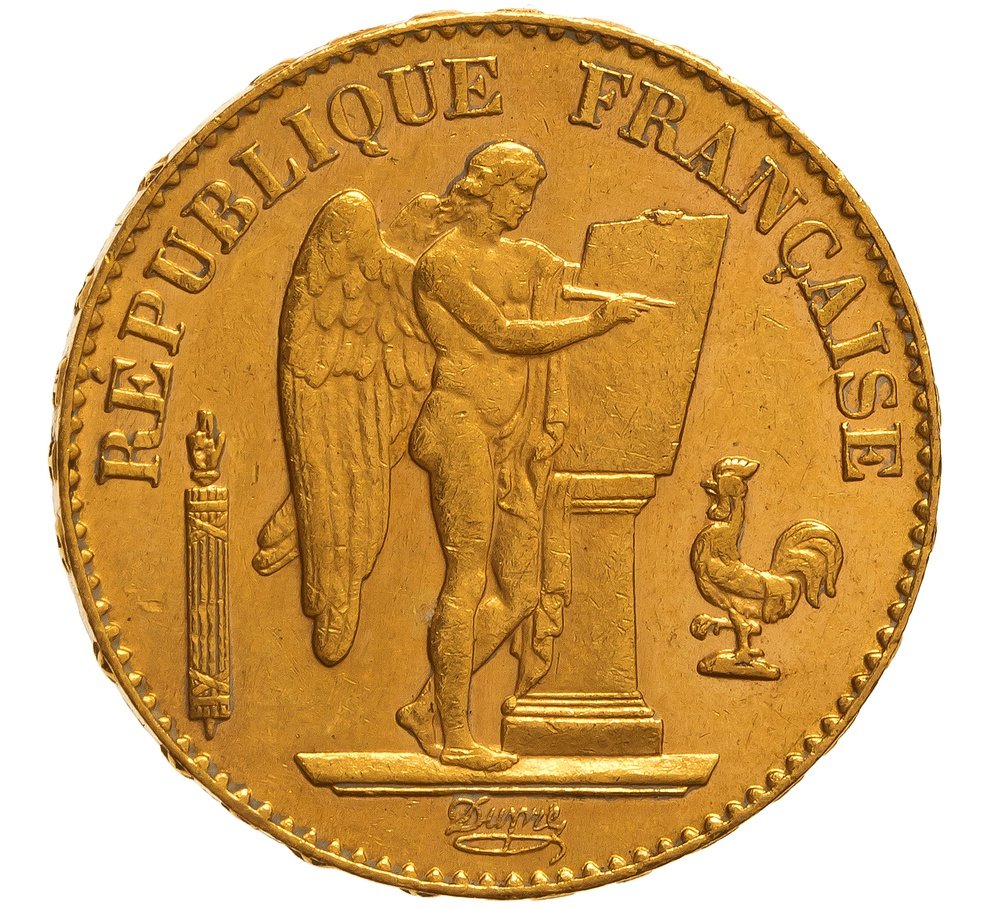 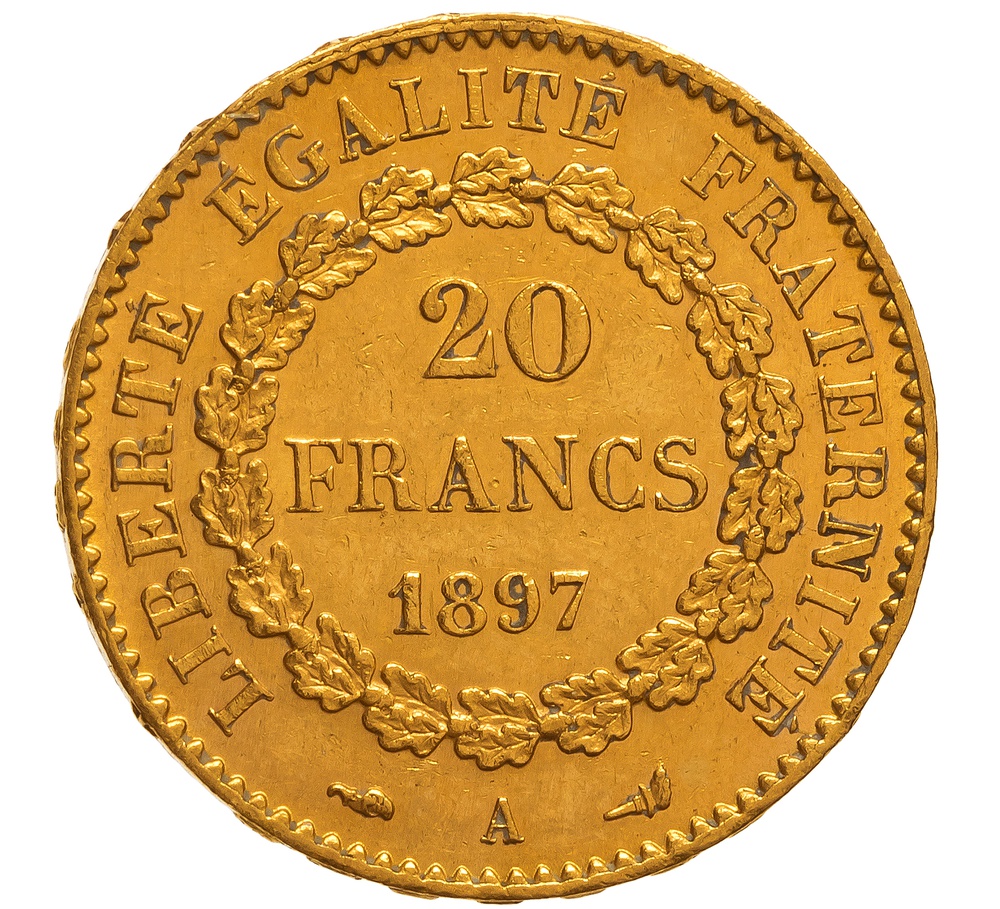 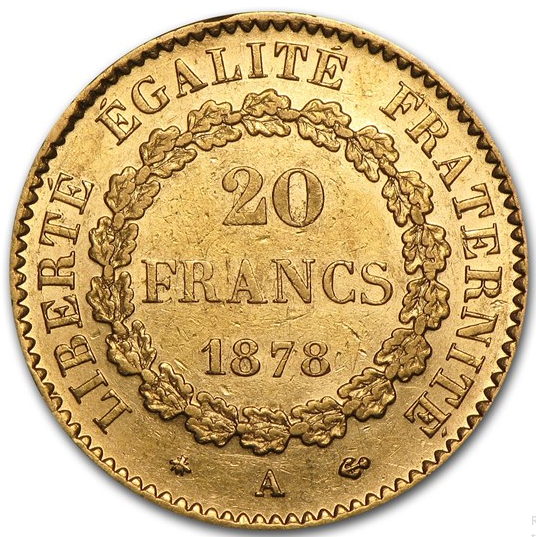 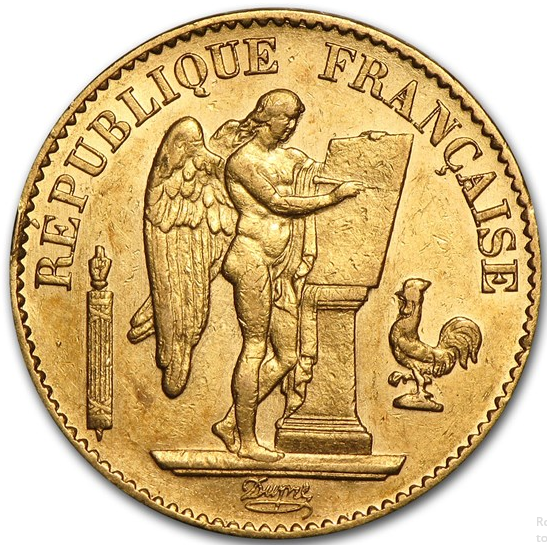 The French golden Angel is one of the most famous coins in the world. Her story is rooted in the 18th century. In 1791, the minting of new Luidors began. The appearance of monetary units is associated with the Great French Revolution of 1789-1799, as a result of which the Constitution was adopted. The design was developed by the famous French engraver Augustin Dupre.

It is believed that Dupre did not portray an angel at all, but a winged genius - a guardian spirit inspired by ancient Roman mythology. In the hands of the genius is a scribble on which he writes the word "Constitution." However, external similarities with the more familiar image of a winged man - a biblical angel - led to the fact that such a name was assigned to the coin.

Over the years, the design of the coin has changed. But if the obverse affected only minor changes: a new pose that disappeared from the scrub inscription, then the reverse underwent significant changes after the execution of Louis XVI. Initially, his portrait was depicted on the reverse. After 1793, the face value, a year, began to be minted there, and later the inscription was added: "LIBERTÉ ÉGALITÉ FRATERNITÉ," which means "Freedom, Equality and Brotherhood."

Today, the Angel of France is very popular as a collection copy and investment asset. The coin presented on our website is made of gold 0.900 samples. The total weight of the monetary unit is 1 troy ounce (31.1 g). The weight of pure precious metal in the specimen is 29.3 g.

We only sell original coins, authenticity is documented. You can order any catalog item online with secure delivery to your address. Goods are offered at a market price, without unreasonable overstatement. For Club members - discounts.

Write a review
Preguntas populares
Is my purchase insured during delivery?

Yes, we take out coin insurance during delivery. This guarantees the safety of the purchase and the return of the full value of the goods in case of force majeure.

How can I pay for my purchase?

We have two payment options available:

Attention! Bank cards are not accepted for payment.

I made an order but I didn't get a confirmation.

Can I collect coins from your office?

Yes, you can come to our office for goods after cashless payment or pay for the order on the spot in cash.

Bank cards are not accepted for payment.

Do you have international shipping?

Yes, we send coins to other countries. International shipping costs are calculated individually.

When will they be able to deliver the order?

Delivery time depends on how you choose to receive the item. Courier delivery takes from 2 to 5 working days. Sending by mail - from 3 to 7 days.

Can I order a coin with my own engraving?

No, but a coin can be an original gift for a very dear person, due to the fact that the year of issue of the coin may be the year of his birth.

Haz tu pregunta
Ваш браузер устарел рекомендуем обновить его до последней версии
или использовать другой более современный.
The club discount is given for a one-time or gradual purchase of 10 ounces of gold.
Data Protection Information
By clicking on the "Accept" button, you consent at any time to the use of KALITA.GOLD cookies, third parties and similar methods to optimize the website and its correct operation, as well as to display ads based on interests. Also, other methods used to conveniently customize the website, create anonymous statistics, link information about your use of this website and our online ads to order transaction data and other customer contacts, or to display personalized marketing content on this website and elsewhere. Click "Privacy Policy" to learn more about how we use your data, who our partners are, what you consent to, and your right to recall at any time. By clicking "Accept," you agree to the use of these technologies and the mentioned processing purposes. You can decline your consent here or revoke it at any time in your privacy policy.
Accept
Privacy Policy